We’re Taking the Pledge! Blackthorn Commits to the Future of our Planet & People

Blackthorn.io is committed to supporting a sustainable future for all. We’re backing up that commitment right from our top line through several initiatives listed below.

We joined Pledge 1%, a global corporate philanthropy movement, to bring tangible outcomes to Blackthorn’s mission of giving back to improve the world.

Through Pledge 1% Blackthorn.io is becoming a force for good by investing in efforts to mitigate the threat of climate change, helping to fund a collection of innovative carbon removal projects.

We're proud to be a partner supporting Stripe's Climate Project. To mitigate the threat of climate change, the majority of climate models agree that the world will need to remove carbon dioxide from the atmosphere on the scale of approximately 6 gigatons of CO2 per year by 2050. That’s roughly the equivalent of the United States’ annual emissions. The world is not on track to achieve this.

Recognizing this challenge, we’ve decided to commit 1% of our revenue to support next-generation carbon removal technologies.

Our contribution is being allocated to the projects listed below, which will expand over time.

Interested in doing the same for your organization? Find out how here.

We’re excited to support these projects because they represent permanent carbon removal, with the potential to become dramatically less expensive and higher volume over the coming years. Our contribution allows us to act as early adopters of these technologies, demonstrating demand to help them improve.

"In partnership with Stripe, our trusted payment processing partner, Blackthorn has proudly contributed $4,138.16. This is only the beginning, as we plan to keep contributing 1% of our revenue to the Stripe Climate Project."

Ecosia: Blackthorn has also contributed to the quest for negative carbon emissions by using Ecosia, a search engine that plants trees while users search the web. This is an effortless way to help that has a compounding effect. Find out how you can help here.

“Going forward, we plan to donate $2,000 to $3,000 to other climate organizations,” says Blackthorn co-founder and CEO Chris Federspiel, “as part of our pledging 1% of profits toward planting more trees.”

One Tree Planted: For every dollar we contribute, one tree gets planted. One Tree Planted works with reforestations partners in North America, South America, Asia, and Africa who help get trees in the ground to restore forests after fires and floods, create jobs, build communities, and protect habitat for biodiversity. In 2019, they reached a record, planting 4 million trees.

TIME OFF FOR TIME WELL SPENT

Blackthorn.io team members are encouraged to take time off to give back through nonprofit work. During annual company retreats, the team contributes time and efforts to organizations like Give Kids The World. 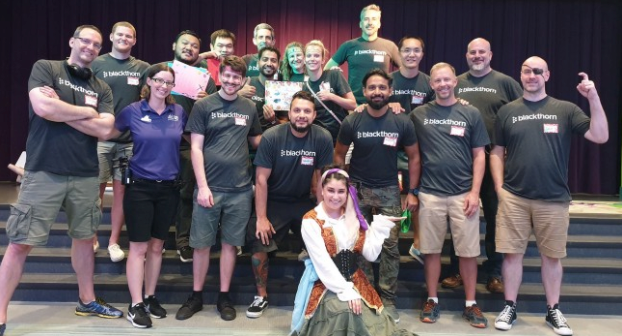